Genetic genealogy forums online — Facebook groups; Anthrogenica; 23andMe community, etc — is the layperson's vast laboratory where we hash out our results, research, discoveries, journeys, family heirlooms, difficulties, disappointments and debates. It's a social place were we can obsess over DNA with lusty abandon.

But sometimes a few bad apples spoil the whole experience. Some people's obtuse behavior in genetic genealogy forums online (GGFO) can be disruptive, offensive and lead to detriment and disaster. So in the interest of fostering better behavior, communication, cooperative collaboration, as well as a safe and objective environment to learn, teach and/or exchange knowledge, I came up with these 50 Golden GGFO etiquette rules (or suggestions), which is also available on the ISOGG Genetic Genealogy Mailing List:

[King Genome's Tip: Download a copy (pdf) of Genetic Genealogy Standards and use together with this list.]

1. When you first join a GGFO, BEFORE YOU POST ANYTHING OR COMMENT you MUST take time to (a) read the forum's rules AND (b) review what others post, including topics and comments. If you're unsure of what to post then ask an administrator/moderator for assistance. If you don't agree with the rules of the forum then leave immediately.

2. If you believe genetic genealogy is a fake science or you have no trust in DNA testing then please do us all a favor and remove yourself immediately. You should know that no matter what you believe, DNA is a real, evolving and advancing science and GGFO are designed to facilitate the progress.

3. Genetic genealogists and traditional genealogists should not wage a war with each other in a GGFO based on which method or field is better. Both are inextricably intertwined and should be used together — along with your collaborative efforts — for the best results.

4.  Absolutely NO political and religious badgering, soapboxing, hate-mongering, race baiting, trolling or any such capricious behavior. GGFO are unequivocally not the place for such discourse and banter. Go blow your steam off somewhere else.

5. Stop misusing socio-cultural ethnic labels and antiquated racial social constructs as genetic genealogy and population genetics terms for ethnicity. There is NO such thing as "African-American DNA" so avoid using the term. You should not be referring to African-Americans as Negroes except in a historic context. Also do not use Negroid, Caucasoid, and Mongoloid to make racial distinction between populations or ethnic groups. Yes, it is opprobrious. GGFO are not breeding grounds for racism, prejudice, bigotry miscegenation, superiority complexes, or ignorance.

6. Never romanticize or minimize slavery, the Holocaust, Trail of Tears, or other horrific historic events because it's offensive. If you have a reasonable inquiry or discussion point around these events, be sure to carefully think about what you post before you hit that "Submit" button.

8. NEVER discuss living people's personal identifying information (ie name, address, city, birthday) within or outside of a GGFO. There are many crazy people and identity thieves lurking around, and we don't need you helping them out.

9. If someone reveals that he/she is an adoptee, foundling, foster child, donor, etc in a private, secret or closed GGFO, please refrain from revealing any of this information or "outing" the person publicly. Further if the this person posts information or photos about a non-biological relative, it's NOT up to you to discuss their relationship or adoption status, nor make any biological distinction between their relatives. It's tacky, spiteful and frankly none of your business.

10. If someone reveals that he/she is adopted or looking for a biological relative in a GGFO do not insert yourself into the situation by playing match-maker unless you're a qualified professional or search angel. Your heroic efforts may actually cause irreversible detriment to the situation.

11. If a GGFO member posts something about their new relatives/genetic matches, you must refrain from asking this GGFO member about contacting their new relative/genetic match, or to provide you with the relative/match's name, GEDmatch kit number, or any information that the GGFO member did not provide in the original post. Your overzealous behavior is meddlesome and could scare off people new to the world of genetic genealogy.

12. Respect copyright, trademarks and ownership rights of images, content and resources when posting in a GGFO.  Give credit and recitation where necessary or as mandated by law for any content you post. You could get in a lot of legal trouble for infringing upon someone's ownership rights.

14. Do not join a GGFO with the expectation that its members or administrators will solve your mysteries, or act as a personal genetic genealogy servant for your every question. In general this behavior turns others off. No one is obligated to help you.

15. Do NOT volunteer the services of those with genetic genealogy expertise nor refer people to them without first contacting them for availability via private or business e-mail. If you do refer someone please be sure their inquiry is clear, they provide any valid evidence to buttress their claims, and perhaps most importantly if the expert is available and charge fees.

17. Make sure your questions and inquiries are well thought-out and expressed clearly. Do not write in a vague, nondescript or rhetorical manner. Think before you post dammit.

18. Do NOT "shout-out"  members in a GGFO (ie tagging their name in a post) — especially administrators, moderators, possible relatives, genetic genealogists, scientific experts, etc. It comes across as demanding, pushy and rude. It's more proper to contact the person by private message or e-mail first. If you don't get a response then you must realize that some of these people are extremely busy. Just be prepared to get no response at all and to find your answers another way.

19. If you post other people's DNA results in a GGFO, please REDACT the person's name, photo images, and GEDmatch kit number unless you have expressed permission to do otherwise by the owner of the results. You MUST respect people's privacy.

20. If someone in a GGFO refers you to a valid study, blog or link, please take time to read the information before responding again, unless you've questions about the material. Otherwise you're really being unfair to everyone else, and people will soon be unwilling to help you. In genetic genealogy, reading and studying is fundamentally required. 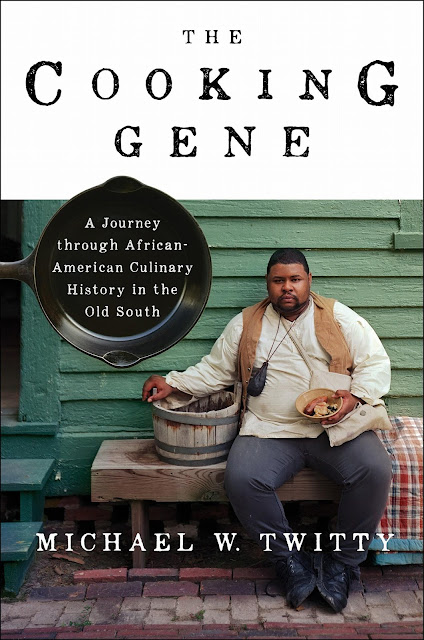 I'm proud to report that Michael Twitty allowed me to interpret his family's DNA results and am thus featured in his amazing testimony (see sample below from Chapter 8, pg. 131-132): 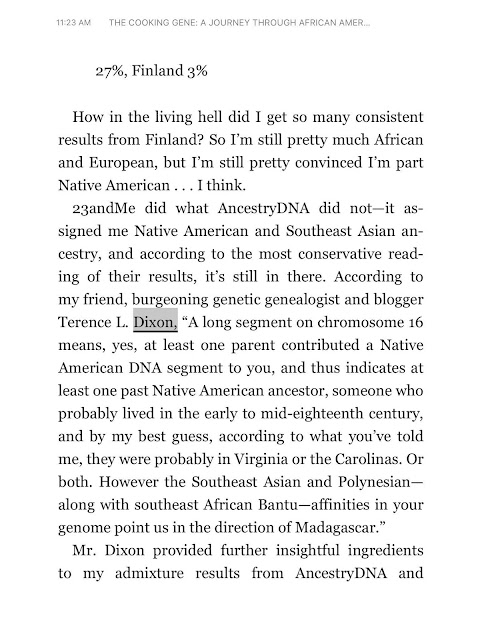 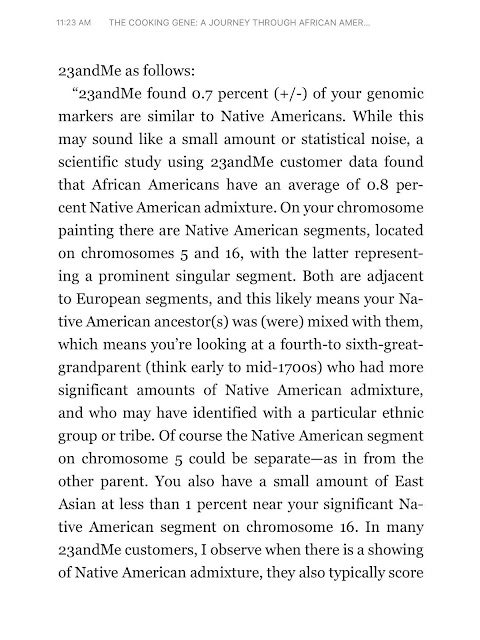 THE COOKING GENE  has garnered Michael Twitty even more national attention, with great reviews by New York Times, Economist, Washington Post, etc. He has an exhibit at the Smithsonian National Museum of African American History & Culture, and has been featured frequently on TV shows (Bazaar Foods), news programs, as well as old plantations (including Colonial Williamsburg). 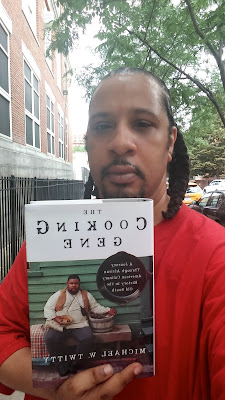 Please join me in supporting the enigmatic Michael Twitty by purchasing your copy of  THE COOKING GENE  today. And you get to read the rest of our conversation!!! ... Available on Amazon, Barnes & Noble, Kindle, etc. 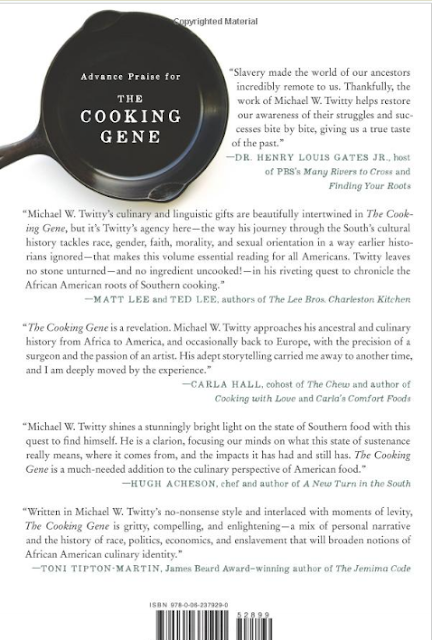 August 2017 — Summer is in full swing here in the U.S.A. and sizzling hot DNA kits sales are back by AncestryDNA and FamilyTreeDNA. I will update this blog as new summer sales occur so check back often.  ... But now is a good time to stack up 'em up like pancakes.

(1) AncestryDNA announced it has largest consumer DNA database with now 5 MILLION customers. In honor of this major milestone, they're celebrating with 30% off AncestryDNA kits thru August 15! That's $69 (excluding taxes and shipping).

TIP: If order using this AncestryDNA Link it will benefit the Kits For Kindness program sponsored by Facebook group DNA Detectives.

(2) FamilyTreeDNA heats up Summer 2017 with it's Friends & Family Sale, featuring scorching hot price reductions on new tests, add-ons and upgrades. And the Big Y is now only $395, the lowest it's ever been. So now's the time to stock the genetic genealogy chests chock full of tests now. And if you're a male and been waiting to take the Big-Y now'ss the time to do it. Well actually you have from August 1 until August 31, 2017. Here is the menu (and you can order here): 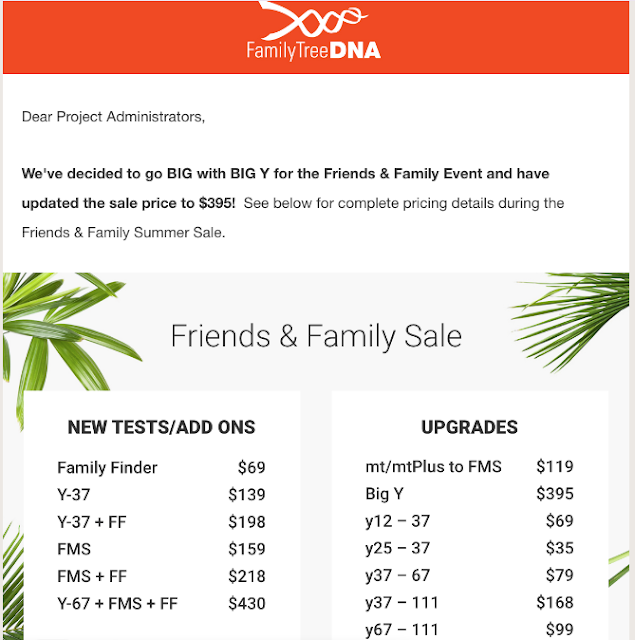