The 3 Types of DNA Tests for Ancestry & Genealogy VISUALIZED!

A lot of people know about genealogical DNA tests but have no idea there are three main tests to choose from that measure very different parts of your ancestry. So I edited two blog posts to add this screen-grab, which I altered with information to help explain the three different types of DNA tests available. What do you think? Does it makes things slightly easier to understand? If so, share this blog:

NATIVE AMERICAN DNA Is Just Not That Into You

Disclosure
Let me guess! You have an "Indian Princess" story in your direct family line? Or your great-great-grandfather was rumored to be half-Cherokee? Or you've got photos, census         records, tribal enrollment papers and other anecdotal evidence proving your direct ancestor was Choctaw? In fact people tell you all the time that you and especially your grandmother have features like the Rosebud Sioux Tribe? So when you decided to take a DNA test, you were either mildly expecting or hastily anticipating Native American to show up in your DNA ( = ethnicity admixture percentages)? And now your results are in and ...you got ZERO percent? OR a disappointingly low amount? OR another surprising ethnic component altogether? Yikes!
Is that about right? 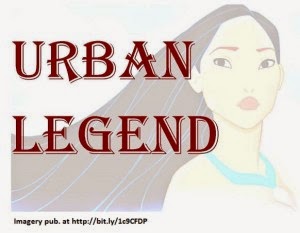 In this "Recombinant DNA" blog and deep dive I'm going to discuss three general (and simplified) reasons why Native American genes would not show up in your DNA, and what to do if you suspect it is hiding (ie not being reported) in your results. I also provide examples of why you may need to test at more than one DNA company and/or the same company twice to find your elusive Native American ancestry. To choose the best DTC personal genome service(s), please see The Best DNA Tests for Native American
Ancestry, where I discuss each offering. Also be sure to join our Native American Ancestry Explorer FaceBook group [recommended by Roberta Estes 2016 blog here] to share your story.

But before I talk about why your results may be void of Native American DNA, I want to go over  a few quick points:

Three Reasons Why Native American DNA Does NOT Show Up On Your Test Results ...

(1) Your "full-blood" Native American ancestor may have lived so far back in time that your NA ancestor's DNA has "washed out" by the time it reached your generation.
According to 23andMe, Native American DNA has been known to "wash out" in a few short  generations (about 5), especially if none of your other progenitors introduced it along the way. Wash-outs usually occur during Random Genetic Recombination, when DNA gets randomly remixed as it passes from parent to child --- some of it (ethnic components/DNA sequences from our direct fore-parents) eventually gets lost over time. This is because each child inherits random DNA contributions from his/her 2 parents (50% each); 4 grandparents (25% each); 8 g-grandparents (12.5% each); 16 gg-grandparents (6.25% each); 32 ggg-grandparents (3.125%); 64 gggg-grandparents (1.56% each), etc. as the table here illustrates:

As you can see the farther your NA ancestor is removed from your generation, the more likely your average DNA contributions from this NA is to show up in low admixture percentages or none at all. For example, if one of your 32 ggg-grandparents was full-blood Native American, you stand to inherit up to 3.125% of that ggg-grandparent's DNA. Since the DNA you will inherit from your parentage is RANDOM and your ancestors will rarely be 100% of any one ethnicity, it is theoretically possible for you to inherit non-Native American DNA from this ancestor if other ethnic components are present and according to when this NA ancestor was introduced to the bloodline. For example Native Americans are known to have varying amounts of East Asian and Eurasian admixture due sharing ancestral populations with them. And after 15th century, Native Americans became admixed with Europeans and Africans.

NOW HERE'S THE TRICKY PART! You don't inherit your reshuffled DNA in fixed percentages as the chart above suggests. Rather you inherit your DNA sequences in chunks or segments of varying "lengths" (aka CentiMorgans) as shown in this illustration: 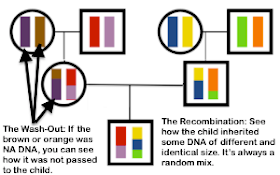 So starting with your grandparents, you will actually NOT get 25% DNA equally from each one. Instead the contributions per grandparent could be more like:

Question: How much of the 10% DNA you inherited from your  grandparent #4 will consist of the 12.5%(+/-) Native American DNA contribution that he received from his g-grandparent (= ggg-grandparent)?

At the 5th generation for YOU, chances are equally likely to be anywhere 0.00% to 3.125%(+/-) NA DNA depending on how much NA DNA grandparent #4 gave your parent, and if your parent passed any of it to you (see How Much Of Your Genome Do You Inherit From a Particular Grandparent). While you will definitely inherit DNA from your grandparent #4 (@ 10%), it may not include any DNA that can identified as Native American. In my own family I have a relative who did not receive any NA DNA from his parents, even though his father has a NA mtDNA haplogroup (B2) and whose DNA-tested close paternal relatives (aunt, uncle, cousins) scoring 2%(+/-) NA (inclusive of shared NA DNA segments). Instead my relative got 4% Southeast Asian (SEA). He just didn't get any of the NA DNA from his father, noting the SEA component in this branch of my family is related to Malagasy peoples (see Sergio Tofanelli, et al and Teresa Vega's blog) ancestry, and much stronger than the Native American. Go figure.


Wash-outs also happen when no additional Native American DNA  is introduced to your blood line.  This is very common in the  United States where events like Indian Removals prevented indigenous peoples from integrating with the general population. To this point, Latinos in US descend from ancestors whose circumstances allowed for extensive Amerindian intermixing with European and African populations in Latin America, which is why Latinos usually show higher amounts of Native American DNA on atDNA tests. In the US, Native American removal and extermination events coupled with "regional impacts of slavery, immigration, migration and colonization within the United States" [see 23andMe study: Genetic Ancestry of African Americans, Latinos, and European Americans across the United States] best explains why Native American DNA often shows up in low or ghostly (0.00%) amounts for Americans (and Canadians). The good news is that even in small amounts (below 2%) Native American ancestry can be very REAL so you might not want to be so quick to dismiss it as statistical noise. Of course this also means your ancestors had limited interaction with Native Americans and chances are none of their DNA got into you.

The following example below illustrates how fast Native American DNA can wash out. Here is a father who is a descendant from the Cree/Salteaux tribe; he inherited 10% NA. His daughter with 7% NA, and his grandson with only 3%. His grandson may not pass any or all of his NA DNA to his own children at the rate of decrease:

Welcome to the ROOTS section of my blog, where I focus on general and personal Genealogical and/or DNA stories of my interest. (NOTE: I still explore Genetic Genealogy subjects in the "Recombinant Genetic Genealogy" section of my blog). This inaugural post pays homage to the 50th Anniversary of Bloody Sunday and Selma's role in the fight for Voting/Civil Rights by spotlighting two courageous heroes who also happen connected to my Curry, Dunning, Harper family of Marengo County, Alabama. I briefly discuss: (I) James E. Gildersleeve & the Courageous Eight; (II) centenarian Mrs. Ola Burroughs Dunning, and (III) James Gildersleeve's genealogical connections to my Curry, Dunning, Harper family. Also be sure to visit the National Voting Rights Museum & Institute in Selma. ENJOY and LEAVE COMMENTS.
SELMA, DALLAS COUNTY, ALABAMA, is a haunting place that I'm earnestly familiar with. About 20 years after Bloody Sunday, we travelled there often -- sometimes to return my cousin to Selma University on Sunday afternoons, and other times we passed through en route to some place else. When we lived in the Northeast the Selma Highway (aka US Highway 80) was the best route to my dad's rural hometown of Dixons Mills, Marengo County, Alabama, located about 50   miles southwest yonder Selma's legendary St. James Hotel with its facade transplanted right out of Orleans French Quarter; ghostly Spanish moss (New Tillandsia     usneoides) black veiling stoic Oak trees (Quercus virginiana), and oh, that courageous Edmund Pettus Bridge hunching over the clayed Alabama River. It was always approaching this unassuming stubby steel through-arch span that Monarch butterflies swarmed en mass aflutter in my gut as I conjured up brutal images of Jim Crow-era Selma. And day-nightmares of the hell unleashed on "Bloody Sunday," the first (March 7, 1965) of three Selma-to-Montgomery marches against civil injustices against Black Americans that ended with 600 peaceful protestors being attacked by Alabama state police and racist mobs. On one such trip, I asked my dad if he knew whether any of our family participated in Selma's demonstrations, especially since his extensive family -- Curry, Dunning, Harper of Marengo and Clark counties -- migrated there during the first two "great" Black migrations. My dad could only muster foggy details, but he did mention something about the Gildersleeve's (they were severally married into our family in Marengo County) and his first cousin Ola Burroughs Dunning (she was a Selma centenarian that I've met when she visited my grandmother). I remembered these queries to my dad after watching the tour de force film, Selma, and beatifying the song "Glory" as my new anthem. So for the 50th Anniversary of Bloody Sunday, I felt compelled to do some research on the information my dad gave me. Turns out he was on to something: